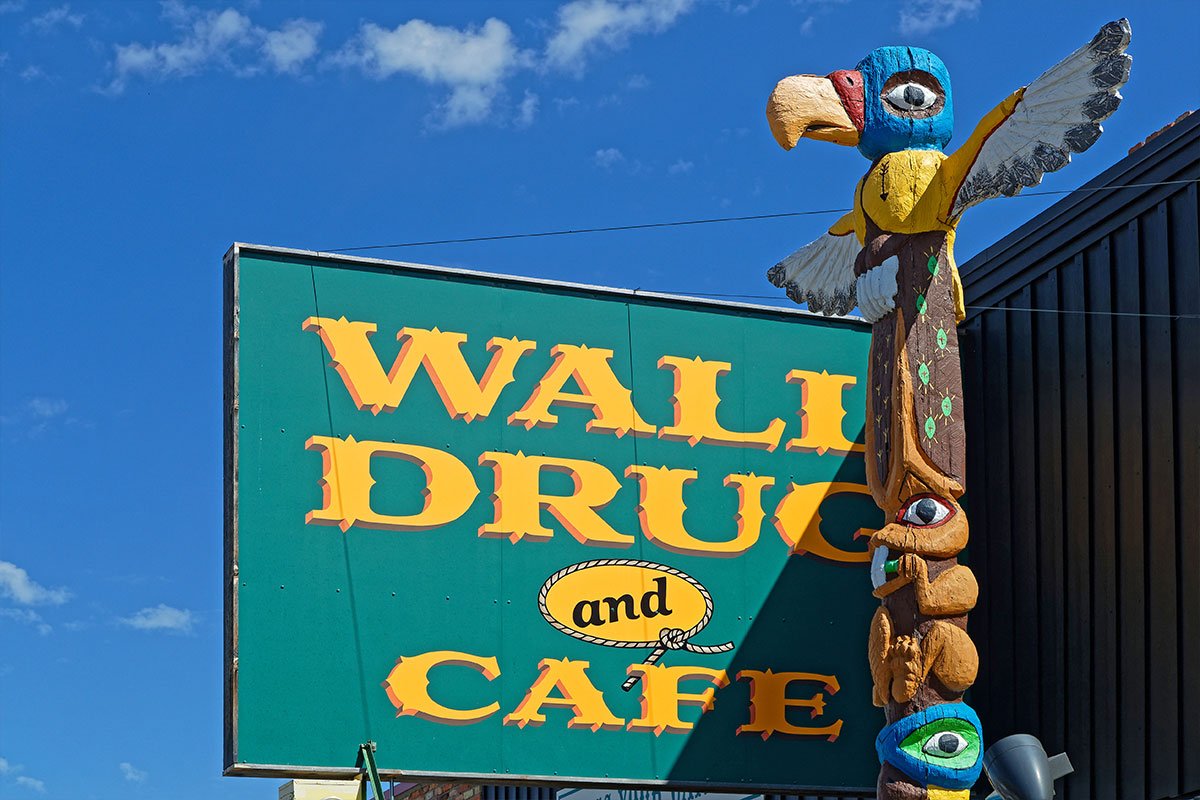 The Most Staggering Marketing Statistic I’ve Ever Seen….

The most inspiring marketing campaign I’ve ever seen came out of nowhere… in the middle of nowhere. Keep reading because this idea can (and WILL!) produce results in any contractor’s marketing.

This story dates back to 2005, although none of the critical facts have changed one iota since then. I was on a 4,975 mile cross country vacation with my wife and six kids… who were between the ages of six months old to twelve at the time. After driving from Texas to Idaho then on to Yellowstone Park, we found ourselves in Rapid City, SD admiring the presidential head carvings of Mt. Rushmore.

The next day after lunch, we loaded up the kids and headed east on I-90 with a destination of Sioux City, SD. About fifty miles east of Rapid City on Interstate 90 we passed a pinprick on the map called Wall, South Dakota. It sits on the edge of the Dakota Badlands, and under normal conditions, it would be one of those no-stoplight towns you’d never exit for in a million years unless nature was calling in the fiercest of ways and you didn’t have an empty bottle handy.

But the conditions surrounding Wall are NOT normal… thanks to Ted Husted.

Ted is the third generation owner of Wall Drug, the mother lode of all weary tourist oases. While most rest stops are nothing more than gas stations with 7-11’s attached to them, Wall Drug is a block-sized bonanza of refreshment, shopping, and entertainment opportunities, including carnival games, museums, a shopping mall, restrooms, restaurants, an arcade, a gas station, a playground complete with an eighty-foot dinosaur, and more. And there it sits, basically, in the proverbial “middle of nowhere.”

Ted’s grandfather, also named Ted, moved to Wall in 1931, with his wife Dorothy and bought the local drugstore. Relatives called them crazy. At the time, the entire town only had 329 residents, and the Depression had sapped them of their money and their will. The Husted’s gave themselves a five year deadline to make the store work, and if not, they vowed to move back to Sioux Falls and get “normal” jobs. When five years was up, progress was minimal, and they nearly abandoned the implausible dream.

Then inspiration struck. One particularly hot August day, Grandma Husted got the bright idea to put signs up along the main road offering free ice water to cross-country travelers. Success was instant; travelers stopped by in hoards and not only ordered free ice water, but ice cream, candy, and other travel treats. Soon the Husteds added more signs. And then more. And then more.

Fast forward to the 2005 Harshaw family vacation. As we pulled out of the Best Western in Rapid City at about 1 PM heading east on I-90, I was absolutely blown away by the multitude of Wall Drug billboards dotting the landscape for as far as the eye could see.

I think you get the idea. If not, maybe this mega-collage will help:

Over the fifty-mile stretch between Rapid City and Wall, I conservatively estimate that we passed a staggering eighty (yes, eighty—think about that before proceeding—FREAKING EIGHTY) billboards promoting Wall Drug. Easily one every twenty to forty seconds. Some were big. Some were small. Some were old and worn. Some were freshly painted and new. Most sat right on the freeway. Some were off in the distance. Sometimes you could see two or three at a time. And all of them were provocative—even for non-marketing junkies.

Since we had a two-year old and a nine-month old who zonked out within twenty minutes of leaving Rapid City, we didn’t dare stop to partake of the shootin’ gallery, traveler’s chapel, or six-foot rabbit. Trust me on this one—never wake a kid who’s got two more hours of nap left in them. We did, however, steal a glance of the eighty-foot T-Rex as we whizzed by Husted’s “Badland Disneyland”—but that was about the extent of our Wall Drug experience. A few hundred miles later we finally landed in Sioux City for the night, and I fired up the laptop and did some online research as soon as the kiddos were down for the count.

As I read through the Wall Drug website, I found a statistic that is now officially the most shocking marketing statistic I have ever encountered. Turns out, all those crazy billboards really work—to the tune of 70%. That is, seventy percent of all cars that pass Wall, SD on Interstate 90 STOP. Seven out of every ten people who drive by can’t resist the siren’s song and convince themselves that, Starbucks be damned, they’ve got to have a cup of five-cent coffee… or at least check out the extensive collection of wood carvings. That seventy percent translates into as many as 20,000 visitors a day in the summer—nearly as many as the neighboring Rocky Noggins themselves.

So here are a few simple questions for the intelligent marketing reader:

Finally, the most important question: How many contacts do you have with your prospects when they’re checking out your business? That’s what I thought—not nearly enough!

So you want more new customers? Take a page from Husted’s book: Wall Drug ’em. The marketing ramifications of this “million billboards in fifty miles” masterpiece are significant. And most of them don’t have anything to do with billboards. The “Wall Drug effect” is much greater than that. Let me give you an example.

Think about a typical new home builder. They spend a couple million bucks to buy and develop a piece of land for a neighborhood and another half a million dollars to build and furnish a beautiful model home on it. Then they pay a salesperson to sit there all weekend and wait for you to walk in after seeing the advertising they spent a small fortune to produce and place in the newspaper and on billboards. By the time you finally wander into the model home, poke around, and get harassed by the salesman, they’re up to roughly $31 billion dollars in cost incurred… just to get you to the point where you’ll fill out one of those little cards with your contact information.

So then what do they do? In most cases, if they do anything at all (and most don’t), they slam the checkbook shut and instead of spending any kind of significant money on their best prospects—the ones who have already set foot in their extraordinarily expensive model home—they instead mail out a cheap little handwritten thank you card that asks you to “please buy a home from them” that arrives about two weeks after the initial visit. I guess they figure if you didn’t buy on the spot when you set foot in the model, that you either a) must not want to buy a home from them, or b) will be instantly swayed to make a half-million-dollar-plus purchase decision based solely on their riveting handwritten message. When was the last time you bought a home after one look and a thank you card?

A few important points: First of all, most people who visit a model home are there because they’re looking to buy a new home; they’re not just looking for their health. Second of all, because of the magnitude of the purchase and the sheer number of available choices, most people are probably going to look at more than one model home—this ain’t like buying a tube of anti-fungal ointment at Walgreen’s—people are going to look around and compare their options. Third, by the time the builder’s measly little platitude-filled, hyperbole-laden Hallmark-wannabe thank you card arrives two weeks after the fact, the memory of their model home visit has probably been buried deeper than the ruins of the Titanic in the prospect’s mental archives.

All that considered, how ‘bout we put Wall Drug to work for this home builder? What if the salesperson took that extremely valuable contact information card that the prospect filled out and input the data into a computer, and they did it (gasp!) on the very same day it was filled it. Now imagine this scenario unfolding: once the data is input, a thank you email is instantaneously launched and waiting for you by the time you arrived home from a day of house hunting. The email goes on to acknowledge the effort put into finding a home and points out some of the advantages of buying a home from this particular builder. The same day, a six by eleven inch full-color postcard is mailed that contains a powerfully stated, well-articulated message that points at some of the advantages of buying their home. Since it’s going through the mail, it arrives one to three days after your visit.

How about one postcard every two days for the next three weeks? There are six mail days per week, so that’s a total of nine additional postcards in twenty-one days. After that, maybe we can cut it back to one postcard every three days for an additional two weeks. That’s four more—and a total of fourteen postcards in five weeks. Meanwhile, we could send an email every five days during that same span—that’s eight total emails (including the initial ‘thank you’ one). So here’s what we have: during the five-week span of time starting the day the prospect walks in the model home, we get twenty-two “touches.”

Question: approximately how many touches do you think they’re getting from other home builders whose models they’ve visited? My guess: about ZERO. Think this increases the likelihood of converting a prospect into a sale? Remember the most shocking marketing statistic I’ve ever heard? SEVENTY PERCENT!!!!

If it sounds too difficult to manage that kind of mailing program, here’s the good news. There’s software that can manage everything for you—including sending the right postcards to the right prospects on the right days. It can digitally print the postcards you need when you need them. And as for expense—emails are free, of course, and postcards cost about ninety cents each to print and mail. Ninety cents times fourteen postcards is a whopping $12.60. How much do you think it costs to get that prospect in the door in the first place? Would you be willing to spend an extra $12.60 over five weeks if it could raise your conversion ratio by 10%… 20%… 50%…. up to 100%?

Quick Hits: here are few more ideas how to use the Wall Drug approach. Note: test EVERYTHING before rolling it out on a large-term scale.

You may not have an eighty-foot T-Rex or a six-foot tall rabbit to capture attention for your business. But you can benefit from the same principles that have led to Wall Drug’s success. All it takes is a little imagination and some disciplined execution… and if you need inspiration, just think SEVENTY PERCENT!